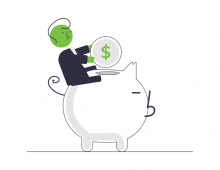 Polish zloty (PLN), which literally means 'golden', is the currency of Poland. The modern zloty is subdivided into 100 'groszy' (Polish equivalent of cents). The place to exchange currency in Poland is called 'kantor'.

Be careful with changing your money at the airports! Usually, it's much more expensive and you can lose a lot of money. It is better to google ‘kantor’ and change the money after your arrival in Lodz. There are some currency exchange offices located in the center (Piotrkowska street):

You can withdraw the money in all the ATMs around the city, but the most common one is Euronet.

Revolut is an app-based banking alternative. Revolut brings freedom to your money with a multi-currency card and mobile app. With Revolut you can now send, spend, and exchange money instantly with intuitive ease. The account enables you to instantly send free money transfers in 24 currencies to banks around the globe, spend fee-free in 150 currencies with a contactless Revolut card, and exchange currencies at interbank rates in the app. The card automatically converts into the local currency at the real exchange rate so you don't have to worry about it.

English
Back to top